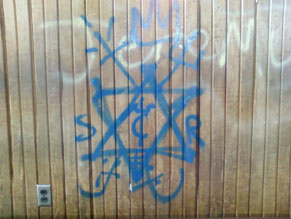 For many years as a Law Enforcement officer and trainer, I have alluded to the fact that White street gangs exist. I know; I grew up with and fought them growing up in Chicago, Illinois. At times that has been met by a lot of consternation and at one point while teaching in the South I was characterized as a racist in one evaluation. That perception, that there are no White street gangs; That the only street gangs are Black and Brown is a "Myth." The issue is very real, and Chicago gangs like the Almighty Simon City Royals, Gaylords, Insane Popes, and Insane Deuces have set up operations in Mississippi, Louisiana, Utah, California, Wisconsin, Minnesota, and Tennessee. They are into Identity Fraud, Burglaries, Theft, and Robbery, not to mention the violence any street gang is capable of committing.

In 1873 a British writer named Luke Pike reported the first active gangs in Western civilization. He documented the existence of gangs of highway robbers in England during the 17th century, and later in the 1600s, London was "terrorized by a series of organized gangs calling themselves the Mims, Hectors, Bugles, Dead Boys and they fought battles among themselves dressed with colored ribbons to distinguish the different factions." The history of street gangs in the United States began with their emer¬gence on the East Coast around 1783, as the American Revolution ended among the White European immigrants mainly English, Germans, and Irish. These gangs emerged in rapidly growing eastern U.S. cities, out of the conditions created in large part by multiple waves of large-scale immigration and urban overcrowding.

Chicago's first street gangs developed among White immigrants along ethnic lines in the 1860s particularly Irish, German, and Lithuanian people. The first gang with a definite, acknowledged leadership was named the Forty Thieves and made up largely of local thieves, pickpockets, and thugs formed around 1826 in the back room of Rosanna Peers's green grocery in New York, NY. The second gang that formed in the area, the Kerryonians, named themselves after the county in Ireland from which they originated. Other similar gangs quickly formed in the Five Points area, including the Chichesters, Roach Guards, Plug Uglies (named after their large plug hats), Shirt Tails (distinguished by wearing their shirts outside their trousers), and Dead Rabbits. By the 1880s, large Irish gangs, the Dukies and the Shielders) exerted a powerful influence on the streets around the Chicago stockyards robbing men leaving work, fighting among themselves, and terrorizing the German, Jewish, and Polish immigrants who settled there from the 1870s to the 1890s. These gangs fought constantly among themselves, but they occasionally united to battle nearby Black gangs. In 1919 Chicago had a three day race riot, propagated by a Black teenager swimming in Lake Michigan who went beyond the racial boundaries. During that riot one of the White street gangs fired at Blacks from a moving vehicle, which may have been the first "drive-by" shooting from an automobile. And you thought it was Al Capone!

In the 1920s gangs became entrenched in the patronage networks operated by ward politicians, with notorious criminals and rum-runners, which formulated Chicago's organized crime called the "Outfit." In 1927 William Thrasher wrote a book identifying 1,313 youth gangs inside Chicago, Illinois. Of these gangs only (62) were Black and there were no Latino gangs at that time. An Irish gang, Ragen's Colts marked boundaries of "their" turf, attacked both Mexican American's and Black youth, and other White gangs also patrolled that area.

The Simon City Royals date back to 1952 when they formed on Chicago's North Side in Simon Park. The Simon City Royals went into the Lakeview area of Chicago in 1968, and claimed Lakeview HS as a base. Several of the founders were former members of the Aristocrats, The Corps, and Ashland Royals among others. Their colors became royal blue and black. The gangs continued as two separate entities in different parts of Chicago for decades to come.

I remember one episode in 1973 when my former partner Pete Lane and I were after a Simon City Royal for escaping from a work release center, and saw him go into a restaurant on Montrose and Sheridan Road in Chicago. We called the Chicago Police Department for backup and no one responded. Then we saw him get up and leave and we approached him. The fight was on, he ran and I caught him four blocks away. When I returned to my partner his "homeboys" were mysteriously handcuffed to a lamppost.

Simon City Royals have numerous symbols which mean, the pitchfork signifies being a warrior, the shield is for fallen members, and the cross mean everything Christian, the wings for the rise of the Nation, the sword means death before dishonor, the blood drops the blood we shed, the torch means everlasting life, #78 signifies the Year of the Awakening, the playboy bunny with the bent right ear for "swiftness," and the six pointed Star of David. The term "Sir" refers to any royal having "put in violent work" for the gang. The Simon City Royals are large in Mississippi, Louisiana, and Tennessee, and could be known as the Insane Royal Family.

In the Southern States Insane Gangster Disciples are predominately White gang members. In Concord, New Hampshire there is a White gang called the Red Villain Gangsters. They wear red, which may give the impression of dual affiliation with Bloods.

The Gaylords are one of the oldest White street gangs in Chicago. They remain active with some of their members well into their sixties and seventies. The Insane Pope's have factions on both the North side and South side of Chicago. Many of these street gangs still have some structure intact. However today's White street gang members identify with gangs that are also racially diverse. But the fact remains; this is no myth!

Life after the Police Department as a Private Inve...
Identifying Local Neighborhood Gangs